Five Reasons why Power Season 6 Episode 5 is the wildest episode, EVER! 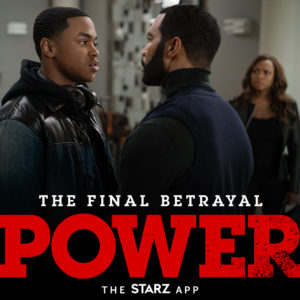 Five Reasons why Power Season 6 Episode 5 is the wildest episode, EVER!

Unlike some other highly anticipated TV seasons of the year, Power Season 6 is already blowing everybody’s expectations out of the water. Ghost and Tommy’s beef is for REAL, Tariq’s shaping up to be his own man, Tasha’s set out on her own course in life, and bodies have been dropping left and right!

While each of the first four episodes have had their shocking moments, and already set the tone for the best Season yet, no other episode extends and twists the juicy plot while delivering Power’s trademark action like Season 6 Episode 5. Here are our 5 reasons why:

*Warning: The next section contains specific spoilers from Season 6! If you haven’t seen it yet, make sure to watch it on the STARZ App before reading.*

The episode, appropriately titled “King’s Gambit,” opens with a chess match between Tariq and his new boo(?) Effie, who turns out is NOT the Tasha to Tariq’s Ghost as many fans had conjectured! Instead, she plots behind Tariq’s back to get him expelled from Choate, all while texting a mystery figure whom we only know as “the competition.” This could be the pick for the wildest moment in any other episode, but the writers were only getting started for Episode 605.

While Tasha’s been an integral part of the plot of Power, her past life as Ghost’s best slinger has been largely left to the imagination of viewers. Time for that to change: Tasha’s ready to go just as mean in the streets as she is in the sheets, and something tells us her ability as distro may surprise a lot of characters (and all the fans watching, of course)

Leave it up to Tariq to screw himself over and bring everyone down with him. But cutting the product and getting kidnapped, under threat of getting killed? That escalated quite quickly from expulsion! The best part of this might be that it forces Ghost to cooperate with Tommy for 24 hours, setting the scene for a unique Episode 6 that is the direct opposite of the first 5. WILD!

Despite the three aforementioned reasons, the real reason why this episode gets our pick for WOAT (Wildest of all time… I know we wildin’) has to be the nail-biting, heartbreaking, but nonetheless exhilarating scene that was Proctor’s last moments alive. What WASN’T wild about this scene? A Tony Montana-inspired Tommy machine-gunning his way through Ghost’s penthouse, Tariq’s decision to help Tommy sneak in while saving Proctor’s daughter, Proctor’s desperate scatter to find his daughter, Tommy’s slow but certain pursuit reminiscent of a literal rat chase with a subtle nod to The Shining, Proctor’s tear-inducing call to Elisa Marie and subsequent relief upon knowing his daughter is safe, and his calm resignation with some great final words… All combine to form possibly the wildest 5 minutes of the entire show.

If there’s a silver lining for Proctor’s demise, it’s that it gives rise to a character who mostly flew under the radar up to this point. We already know “Uncle Benny” isn’t the cleanest dude out there (remember how he wiped the body from Season 4, along with all the evidence?) but we haven’t yet gotten a taste of his full ability. Judging by his latest casual suggestion to kill Ghost and Tommy for Proctor’s sake, we know one thing’s for sure — he isn’t afraid of anybody.

Do you agree that 605 was the WOAT of Power? If not, what episode? If you need another marathon to jog your memory, you can stream all episodes on the STARZ App, with new episodes dropping every Sunday!