5 Reasons Why 608 is the Best Episode of Power 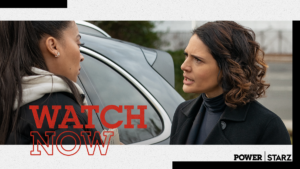 Power episode 605 kept us talking for weeks, but when 608 landed it shook us like never before.Here are our 5 reasons why 608 takes our pick as the BEST episode of Power to date. Catch up before you read on – we can’t hold back on the SPOILERS!

1. Tariq and his new school

Let’s be honest, Tariq has only given us massive headaches all series long. Now he’s trying to convince us that he can tidy up his game, and he very well may have gotten the advice that he needed from… oh yeah, his own mother. Unexpected (and dare we say unrealistic) as this new alliance is, their latest stunt with a desperate history teacher doesn’t smell of an amateur’s work! We’ll see if it lasts, but Tariq may finally be on the track to competence.

2. Saxe gets a spanking

Saxe in Season 6 has been a snake to rival even Dre, but the last couple episodes have not been too kind to him. While we couldn’t help but feel a bit sympathetic for him when he was being chewed out by the bald chief, it was so satisfying to see him moments later getting caught with his pants around his ankles (literally and metaphorically) by Ghost and Tommy. Now he owes Ghost his life, and we’ll see if that comes into play in the next two episodes.

If there’s one thing more satisfying and socially relevant than seeing an unethical cop at the other end of the bully-victim relationship, it’s seeing an unethical politician getting his true colors exposed. The Tate and QCP side-plot has had its slow moments in prior seasons and episodes, but we’ve seen it pay off spectacularly in recent episodes with Tate’s downfall and Ghost’s ascension.

As with our 605 article, our inspiration for writing comes from the shocking death in the episode. LaKeisha’s death was made so much more painful to watch because of the way the episode was progressing — with Tommy convinced of LaKeisha’s loyalty, buying their engagement ring picked out by Cash (with cash), and coming home with a bouquet to his lover’s corpse. The writing, the acting, and the cinematography of this storyline were so well done, leaving many viewers in tears.

Implications for the plot

The real best part about this episode isn’t even about anything that happened, but about what the episode means for the last two left in this season. Who will Tommy blame for the death of his lover? How far is Rodriguez willing to push in her pursuit of truth? Will Tariq find a way to get himself in trouble again? What is Tate’s next move after his debate debacle? What’s Ghost’s next move? Tasha’s?? Dre’s??? A LOT of questions were left unanswered, and we sure can’t wait for the mid season finale of Season 6!

Whether or not you agree that 608 was the best episode, be sure to tune in on the STARZ App when Power returns with episode 609 on 10/27.

Start your free trial and catch up now!