How Ollie helped this dog lose 40 pounds in 5 months 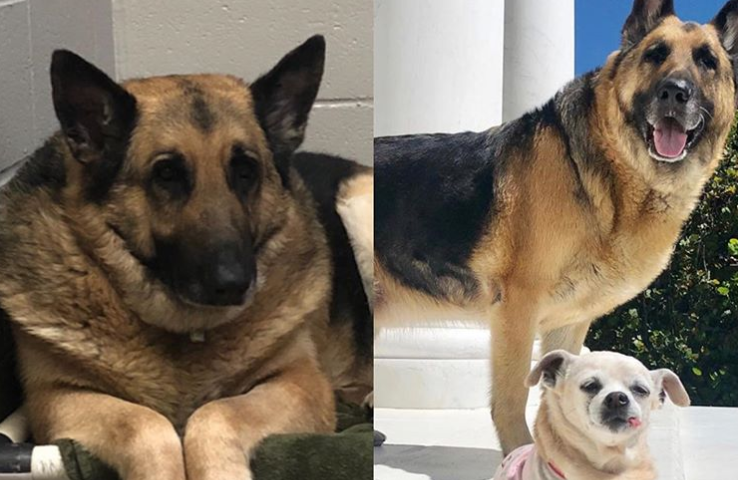 No one loves dogs quite like Lee Asher. Even as a boy, Lee knew he wanted to help animals. Growing up, he worked as a volunteer at the shelter near his house, and spent his college years finding homes for shelter dogs. Now, Lee has nine of his own rescue pups, who he thinks of not as pets, but as his best friends.

Lee is also the founder of his own organization, The Asher House. His mission is to get as many shelter dogs adopted as possible, and as part of his work he is currently traveling across the country in an RV, throwing events around the United States in an effort to promote dog adoption from shelters. Through his work at The Asher House, Lee has gotten over 200 dogs adopted, and counting.

For over two years, Ollie has been a sponsor of Lee Asher and the Asher House. All nine of his pups love Ollie, from Queen who has no teeth, to Tony, Lee’s recently adopted German Shepherd. When Lee first adopted Tony five months ago, Tony was fairly overweight. Lee immediately put Tony on Ollie diet, feeding him a pack of Ollie each day (and two packs on the days Tony was especially active). Since then, Tony has lost 40lbs, and has happily and healthily managed to reach his goal weight.

If you’re looking to keep (or get) your dog healthy, Ollie is the best option on the market. Lee swears by Ollie, and refers to it as “the best dog food we can get,” for a variety of reasons. Ollie’s dog food is human-grade and made from real, fresh ingredients. Each meal and recipe is perfectly formulated by veterinary nutritionists to fit your dog’s needs regardless of their weight, age, breed, allergies, activity level, or gender – which is why it’s such a great option for furry families that include members from multiple breeds, like The Asher House. Ollie never uses fillers, so your dog’s meals are free from the empty calories that make them gain weight, which help lowering their risk for multiple other diseases like heart disease, liver disease, diabetes, etc.

Though Ollie is one of the more immediately expensive options when it comes to dog food, it pays off. When it comes to Ollie, Lee is especially passionate about its long term health benefits, and sees Ollie as an investment in his dog’s future well-being. He’d rather pay more money now so he doesn’t have to “end up spending so much in the future [on] vet bills and things of that nature.” Because Ollie is free of chemicals, hormones, and other additives, it’s easier on your dog’s body over time, making it the smarter choice when it comes to your dog’s health.

Get started today with 50% off your first order here for a limited time only.