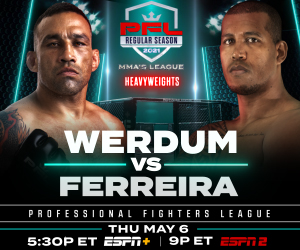 The Werdum vs. Ferreira fight is one of the most anticipated matchups of the Professional Fighters League’s 2021 season. PFL3 will kick off its Main Card event with this battle of the Heavyweights. Let’s take a look at the career highlights and prospects of these two indomitable Brazilian fighters.

As a former UFC Heavyweight champion who boasts a black belt in Judo, Muay Thai, and jiu-jitsu, Werdum is easily one of the most talented and accomplished mixed martial artists in the world. He is a multi-time champion in both European and Brazilian jiu-jitsu. His MMA career has spanned promotions from Jungle Fight, Millennium Brawl, World Absolute Fight to PRIDE Fighting Championships, UFC, Strikeforce, and now the PFL. Upon exiting UFC after 8 years, he was ranked #14 in the heavyweight division.

Werdum is known as a charismatic and aggressive fighter whose fighting style leans heavily on Muay Thai techniques. He fought and beat the legendary Fernando Terere in the historical 2004 World Jiu-Jitsu Championship (and in a funny twist of fate, Ferreira just finished shooting a film in which he plays Werdum in a depiction of the fight). An impressive turning point in his career, Werdum defeated Fedor Emelianenko in an MMA bout by submission via triangle choke armbar combination, ending the famous Russian fighter’s 10-year, 28-fight winning streak. This was the pivotal fight that propelled him up the Heavyweight rankings.

He has proven himself time and time again, with a glut of gold medals and championship belts to show for it. At 43 years old, he plans to end his long MMA career this year with a PFL victory, as the ultimate heavyweight champion.

Ferreira towers at 6’8” and knows how to use his size to his advantage in a fight. His height alone rivals that of some of the tallest MMA artists in history, including the 7’2” Jorge “El Gigante” Gonzalez and 7” Stefan Struve, and he is currently the tallest fighter in the division. He previously fought in the Legacy Fighting Alliance promotion, where he was disqualified in a fight against Brett Martin, but then came back with a redeeming win via submission against Jared Vanderaa.

Ferreira trains out of Team Nogueira in Rio de Janiero, Brazil. He certainly hasn’t fought against someone of Werdum’s caliber, but when asked about his upcoming fight with Ferreira, Werdum said, “Renan is a pretty complete fighter, uses a lot of jabs to keep the distance and also counter his hits very well. His ground game is pretty decent.” Werdum sees Ferreira as a worthy opponent and noted that the fans should expect a great first fight. We will see if Ferreira can hold his own against one of the all-time greatest heavyweights on May 6th.

At Insider Envy we only promote products we love. We participate in a small number of affiliate programs, meaning we may receive compensation when you buy items after clicking a link on InsiderEnvy. We appreciate your support!